Side by side - a short story. First published in "The Football Pink" 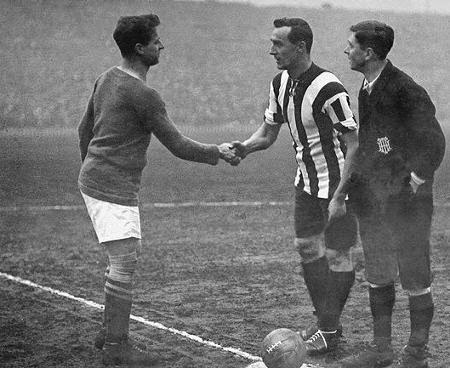 On April 24th 1915 Sheffield United beat Chelsea by three goals to nil in the FA Cup final at Old Trafford, the only Cup Final to be played in time of war. The Khaki Cup...

Joe stepped off the train. The grease and steam from the engine mixed with that distinct smell of man, beast and machine working flat out to produce shells and armour plate: the smell of home. He stopped and checked the pocket of his great coat: the programme was there, safe.
‘What’s up wi’ thi Joe?’
‘Nowt, I were just thinking about our Stan – seems funny ’im not bein’ ’ere. ’e never missed a match.’
‘I’m sure ’e’d rather be out with the BEF bashin’ the Hun.’
‘Come on you two – we’re gaggin’ – let’s go an’ celebrate – shall we get half way back first?’
‘Nah, let’s get one at the Queen’s Head, then come back and see the boys home eh? If we’re late we’ll sneak back through the hole.’

Joe sat with his pint, only half listening to his pals recounting the highlights of the game.
‘I don’t care what we paid for Utley – he were magnificent – a bloody rock at the heart of the team – him and Beau – if we could put up a battalion of men like them they’d have the Union Jack flying over Berlin by Easter. Two thousand pound! A bloody bargain!’
He might not have his brother with him but he was in good company here: men he would be proud to stand side by side with. Harry, who grew up in the next street, who he played with on the Rec as a kid and who signed up with him at the Corn Exchange back in September. Big Bob, the teacher from Healey who, at five foot five, had had to gain another inch in height through pride and another two around the chest in order to pass the medical. Chalkie, the Town Hall clerk, and Walter, the professor, who was smarter than the rest of them put together but who was as coarse as a miner after a pint or two.
They had been together for seven months now. That first day at the Drill Hall they were a shambles: a disparate bunch of individuals in an assortment of Norfolk Jackets, waistcoats, flat caps and Sunday best. They got their orders from the local papers, and it felt right that his first day’s drill – six hours in the sun – was on the pitch at Bramall Lane, overlooked by those building the new Shoreham Street Kop. They practiced rushing at Germans with brooms through the flower beds of Norfolk Park and they dug trenches on the lawns. There was a shortage of uniforms so their first ones, in bluey grey, made them look like convicts – or postmen. They moved from brooms to obsolete rifles. Now they were a proper disciplined unit, sat in proper khaki uniforms, and would soon be getting Lee Enfields – his brother could fire at least sixteen shots a minute with his.
They had headed up to the new barracks up on the moors at Redmires in December. Up there the new regimental Union Jack was torn to shreds by the weather within months, and they would wake up trapped in their huts by the drifting snow – it was then that Big Bob came into his own and was passed out through the window to get the door open.
Those route marches across Stanage in full battle order didn’t half make men of them – if they didn’t get pneumonia. It had been the best time of his life: having such good comrades, getting up at midnight at New Year to sing Auld Lang Syne outside the huts, the concerts at the YMCA hut, sneaking off to the Three Merry Lads and back through the hole in the wall, and the crowning moment: beating the Sherwood Forresters six goals to nil on Thursday! The colonel was strict but fair, and let them take leave for important things: like cup games at Bramall Lane – and today.
‘What about Jimmy Simmons though? The way he crashed in Utley’s centre! I bet his uncle were a proud man today. God bless the big man.’
‘Aye, an’ did tha see ol’ Nudge there today an’ all – done up in his best suit? Best captain United’ll ever ’ave.’
Chalkie raised his glass: ‘To Ernest ‘Nudger’ Needham and William ‘Fatty’ Foulke!’
‘First goal I ever saw was scored by Needham,’ Joe said. ‘Replay of the third round of the cup against Newcastle, the last time we won it. I were only six an’ me an’ our Stan got passed over people’s head right to the front.’
Stan was probably asleep in his bunk somewhere now; God please let that be so; wondering what the score was – unless it got telegraphed to the front. He reached in his pocket and got out the things for sending to Stan – the Cup Final programme and a “Sports Special” Green ’Un, a bit stained from the pie he’d bought before the game. He regularly sent Stan match reports and cuttings from The Independent. Some snobs had wanted football cancelled at the outbreak of the war. But Stan said it gave them heart to read about their teams; and what else were those who were flogging their guts out all week to raise coal or cast steel supposed to do with their leisure time? The one small escape each week from all the worry. Those Oxford and Cambridge men just didn’t like people being paid to play sport – they didn’t get football, the working man’s game – didn’t understand the fight with “sorrow for the young man’s soul.” Those same chinless southerners didn’t bark on about the cancellation of horse racing. Or opera, or golf, or West End theatre! “Business as usual” was a one-sided mantra. No, it was the poor who had to go and fight or sweat in foundries and have no pleasure, never smile, never cheer, until the war was won.
‘Tha looks glum again Joe. I’ll get thi another.’
‘No, hadn’t we best go back over to the station? Don’t want to miss the boys’ return.’

No one seemed to know what time the train was due in, but a crowd was building at the station, those in khaki, like them, getting pats on the back. There had been a lot of men in khaki at Old Trafford that afternoon, perhaps half the crowd. Some like themselves still in training, some on leave, others with bandages or walking on crutches. How his chest had swelled when fifty thousand voices sang ‘God Save the King’ before the teams walked out. He imagined the Kaiser hearing those voices and quaking. The sky was khaki too, especially in the second half: it was during half-time that the fog fell, yellowish and thick, as the band played ‘Tipperary’ and the crowd sang along. The only way you could tell there were people on the other side of the ground was from matches being struck or the glow of cigarettes or pipes. The light improved a little towards the end – the United with their long passing and rapier-like thrusts pushed aside the Beanstalk Club and their delicate passing play: over-powered them – just what they would do to Kaiser Bill. At the third goal, over-excited kids burst onto the field wanting to shake Joe Kitchen’s hand.

Excitement started to build at Midland Station at around ten o’clock – the rumour was that the train was due in. They would miss the last tram up to Nether Green now, which meant an even longer walk up to Redmires – though a happy one. There must be over a thousand waiting. Then the train is heard pulling in and the cheering starts and chants of  “Hi, Hi for the rowdy dowdy boys.”
He only saw the heads of some of the players through the crowd – there was to be no triumphalism, no parading of the cup, they were just bundled into taxis and away into the night.
So that was it then. Another season over. No one believed that football could continue as normal through the next one. No Cup Final next year. Soon their battalion would be leaving the city to go and do their bit. Some had worried that all their training would be for nothing: that the Germans would cave in before last Christmas. No; maybe next – then he and Stan could stand side by side on the terraces once more.

Email ThisBlogThis!Share to TwitterShare to FacebookShare to Pinterest
Labels: Short story: Side by Side